skip to main | skip to sidebar

Due to there being no episode of 100 Word Stories Sunday prompt episode this week due to lack of a host (get better, Laurence!) There is no Sunday prompt story this week. Very sad. Instead, he said, seamlessly segueing, why not check out my new ebook? 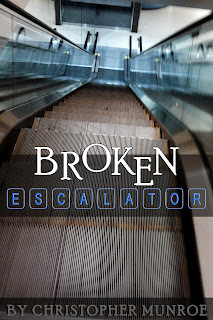 On October 5th of last year, the escalators at West Edmonton Mall shut down simultaneously due to what was believed to be a series of mechanical failures, stranding thousands on the second floor. By the time a rescue operation could be organized and mounted, nearly everyone on the mall’s upper level had been killed, and to this day few people, if any, understand what really happened during the period when that area of the mall was cut off from the rest of the world.

Broken Escalator is a surrealist horror novel by Christopher Munroe, where mechanical failure spirals quickly out of control and human nature is discovered to be by turns nobler and more brutal than anyone could imagine. Or at least, than anyone would like to admit…

Available, to those of you who didn't already know, via Smashwords even as we speak, and other eBook retailers and in audio soon. Check it out!
Posted by munsi at 11:03 PM

munsi
I'm an Actor/Comedian/Spec-fic author from Calgary, Alberta, and this right here is where I put my flash fiction. I hope you like it!